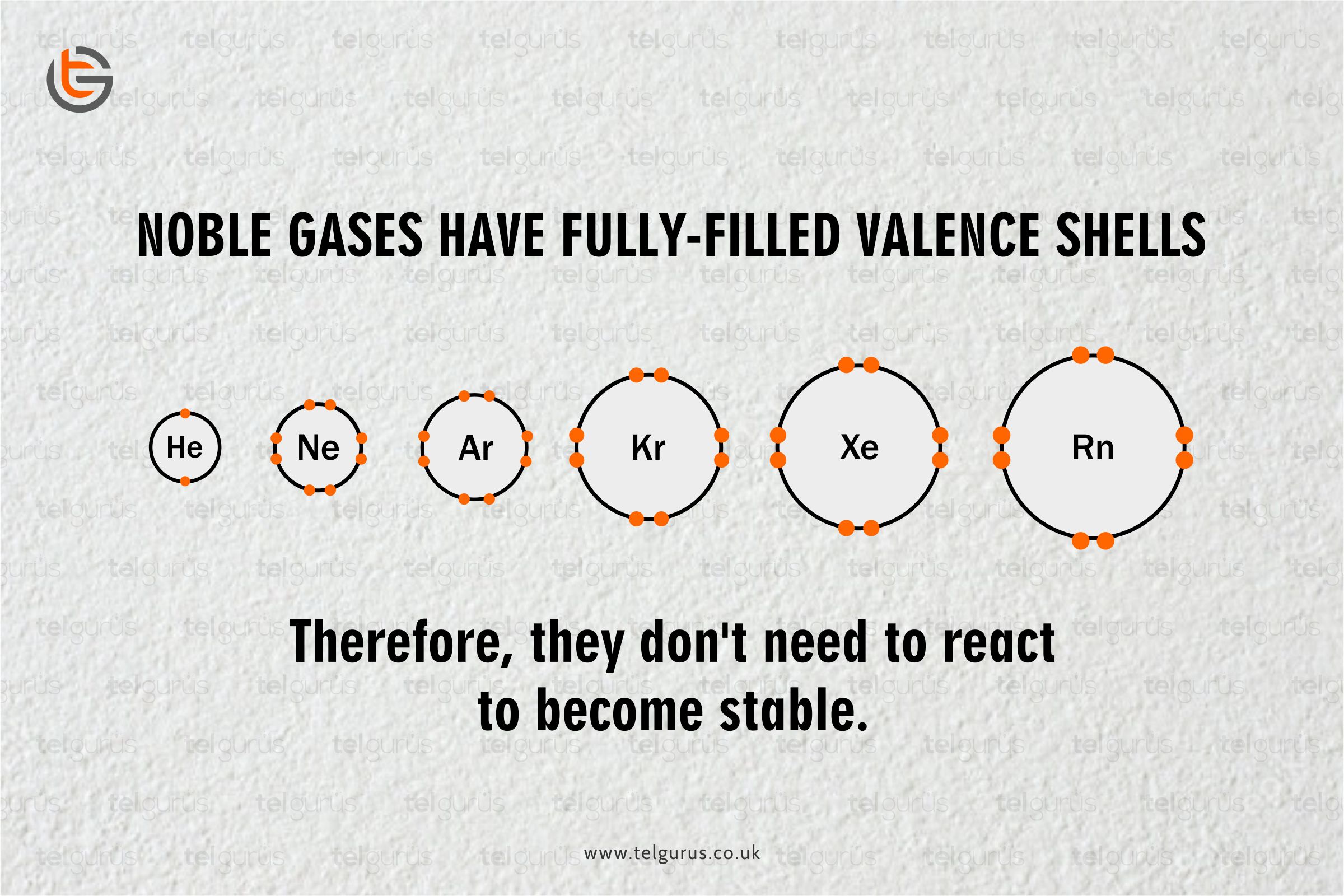 Noble gases are unreactive non-metal gases that often show trends in their physical properties, and their uses depend upon their low density, inertness, and non-inflammability.

Let us get acquainted with everything you need to know about noble gases and the reason behind the query.

What are noble gases?

The noble gases are most stable because of the maximum number of valence electrons in their outermost shell. And that is why they rarely react with other elements as they are already stable.

As compared to the other elements on the periodic table, noble gases are inert and highly unreactive.

Uses and properties of noble gases

The primary properties of the noble gases include

Helium is utilized as a lifting gas in airships and party balloons.

Argon is often utilized as a shielding gas while welding the metal pieces together.

So why are noble gases unreactive?

Noble gases are so unreactive because of the number of electrons present in the outermost shell of their atoms. And as their outer shell is full, indicating it is complicated for them to take or give electrons.

As the noble gases enclose an entire valence shell of electrons and due to this configuration, they are

Noble gases’ outer shell of the valence electrons is generally considered full, giving them a slight tendency to participate in chemical reactions.

The boiling and melting points for a noble gas are close together, differing by less than 18 degrees Fahrenheit or 10 degrees Celsius, including the liquids over a smaller temperature range.

The noble gases generally show significantly lower chemical reactivity, and as an outcome, only a few hundred noble gases compounds are formed.

Neutral compounds in which neon and helium are included in the chemical bonding have not been formed. On the contrary, the krypton, argon, and xenon show minor reactivity only.

Therefore, the reactivity follows the order

Noble gases are considered so unreactive as they have a fully filled outermost orbital configuration, and because of which noble gases are very much stable and have minimum energy. 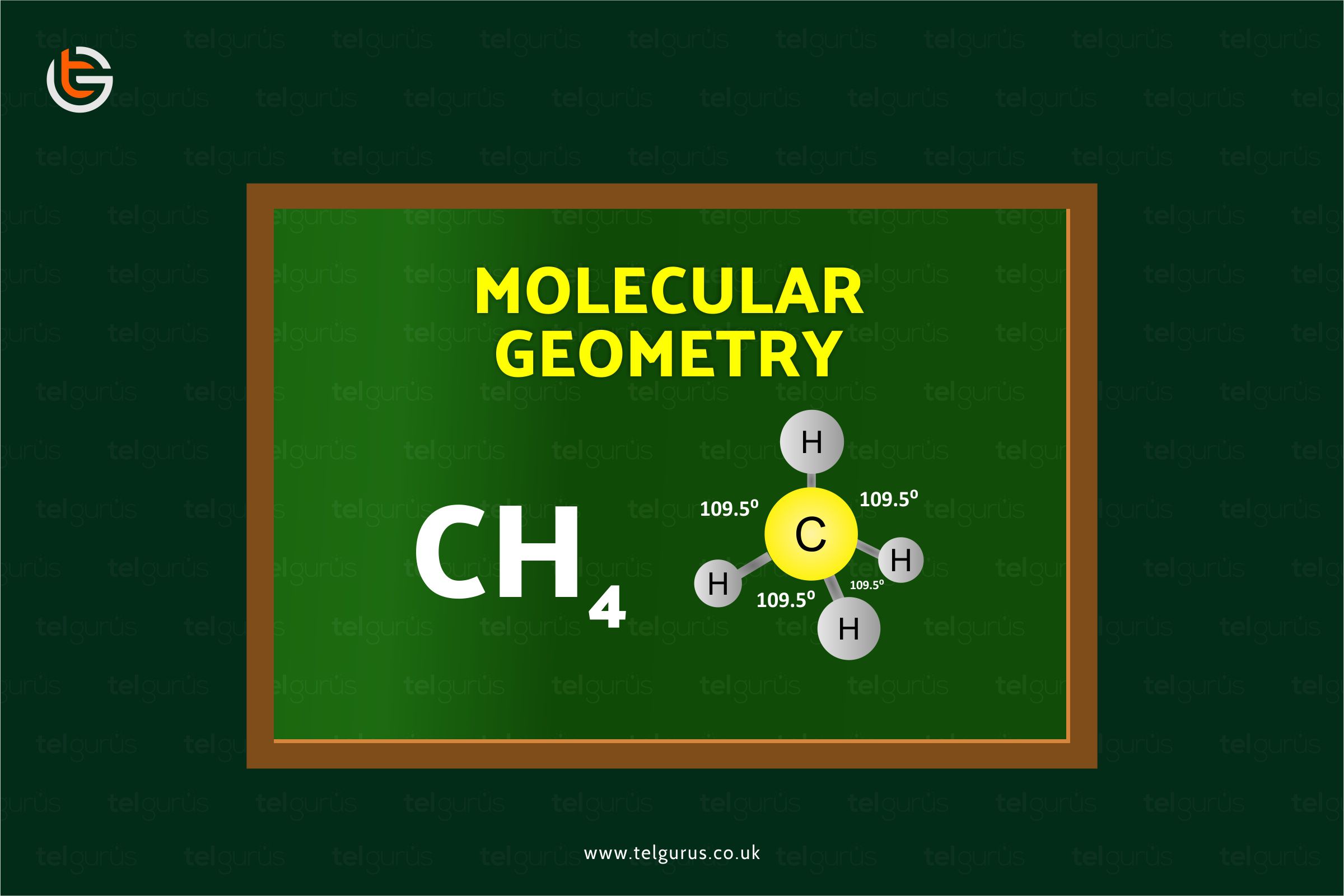 Methane is a gas consisting of one carbon atom for every four hydrogen atoms. Let us get acquainted with everything you need to know about the molecule structure of CH4.

Methane is a gas comprising Carbon and hydrogen atoms with the chemical formula CH4.

It is found in small quantities in the atmosphere of the earth. It is defined as the simplest hydrocarbon comprising four hydrogen atoms and one carbon atom.

It is a powerful greenhouse gas that is flammable and is often used as fuel worldwide. It is primarily used to make light and heat.

The central carbon atom in the CH4 forms the covalent bond with these four hydrogen atoms, and this sharing generally completes the outer shell of both hydrogen and carbon atoms.

The four hydrogens around the central carbon indicate that there are a total of four electron groups around this carbon atom, generating a molecule’s tetrahedral shape.

The shape of methane is a regular tetrahedron with carbon at the centre and hydrogen at each corner.

Is CH4 polar or nonpolar?

The methane structure has all the outer atoms the same, that is, it includes the same dipoles, and also the dipole moments are also in the same direction.

The dipole moment is towards the carbon atoms, so the overall molecule becomes non-polar.

Therefore methane has non-polar bonds and is considered non-polar overall.

Why is CH4 tetrahedral in shape?

Methane is considered tetrahedral in shape as it has 4 electron density regions around the central carbon atoms having four bonds and no lone pairs. 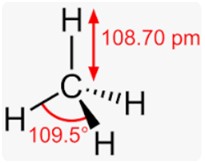 And therefore, the resulting shape comes as a regular tetrahedron with H-C-H angles of 109.5°.

Why is the CH4 molecule tetrahedral?

CH4 molecule is tetrahedral as the four C-H bonds in methane are held at an angle of 109 degrees – 28’.

Since the angle in the space at which the repulsions between the four shared electrons pairs is minimum. 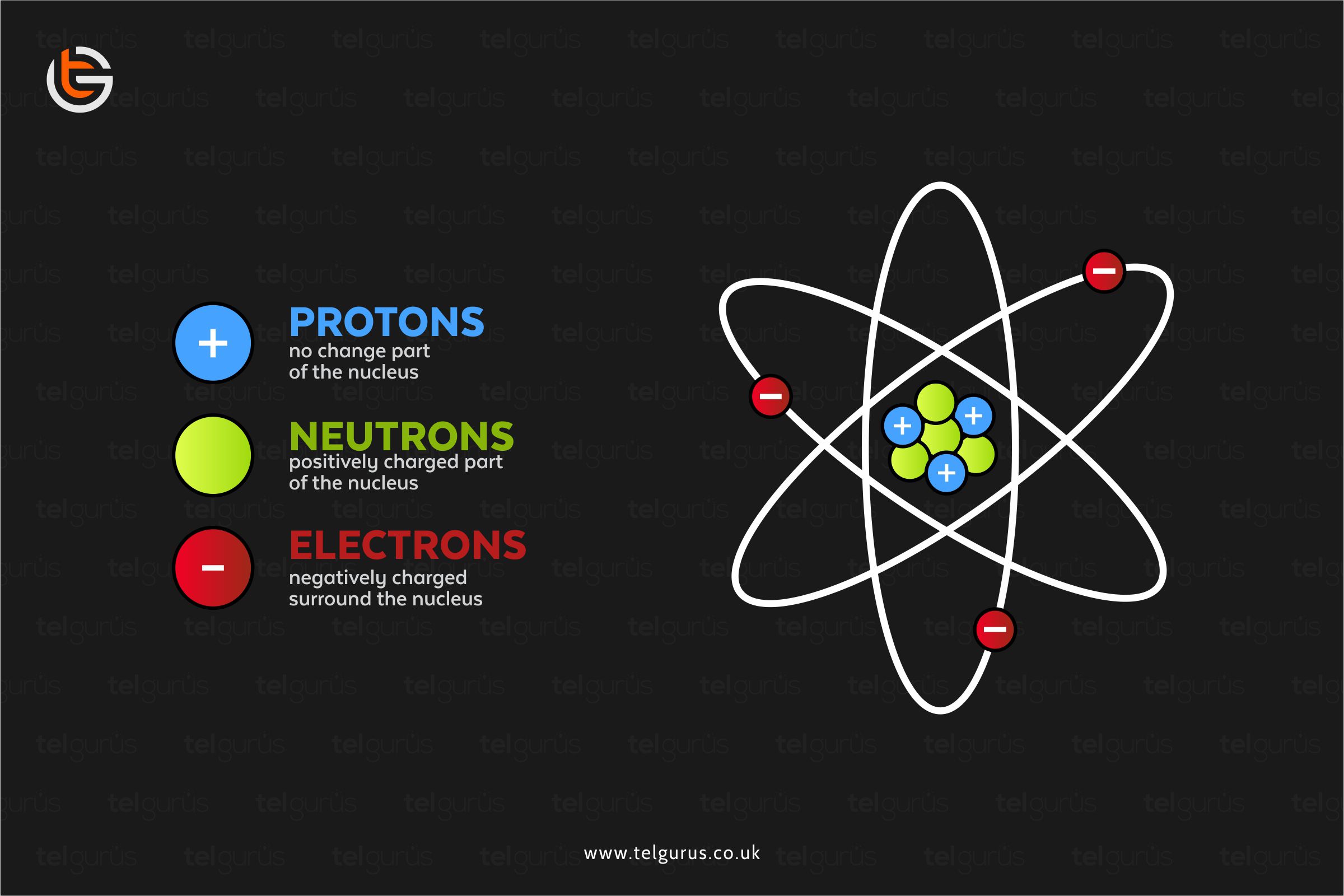 An atom comprises a tiny nucleus surrounded by moving electrons. And nucleus is basically a collection of neutrons and protons where

So, what is the overall charge of the nucleus of an atom?

A nucleus is consists of the neutrons and protons where

A neutral charge won’t cancel out the positive charge that indicates that the overall charge of a nucleus is positive.

And why is the overall charge of a nucleus Positive?

What determines the positive charge of the nucleus?

The number of protons present in the nucleus determines the positive charge of the nucleus.

As the protons are positively charged, and a nucleus comprises protons and neutrons, so the protons present in the nucleus determine the positive charge.

Therefore, a nucleus has an overall positive charge. 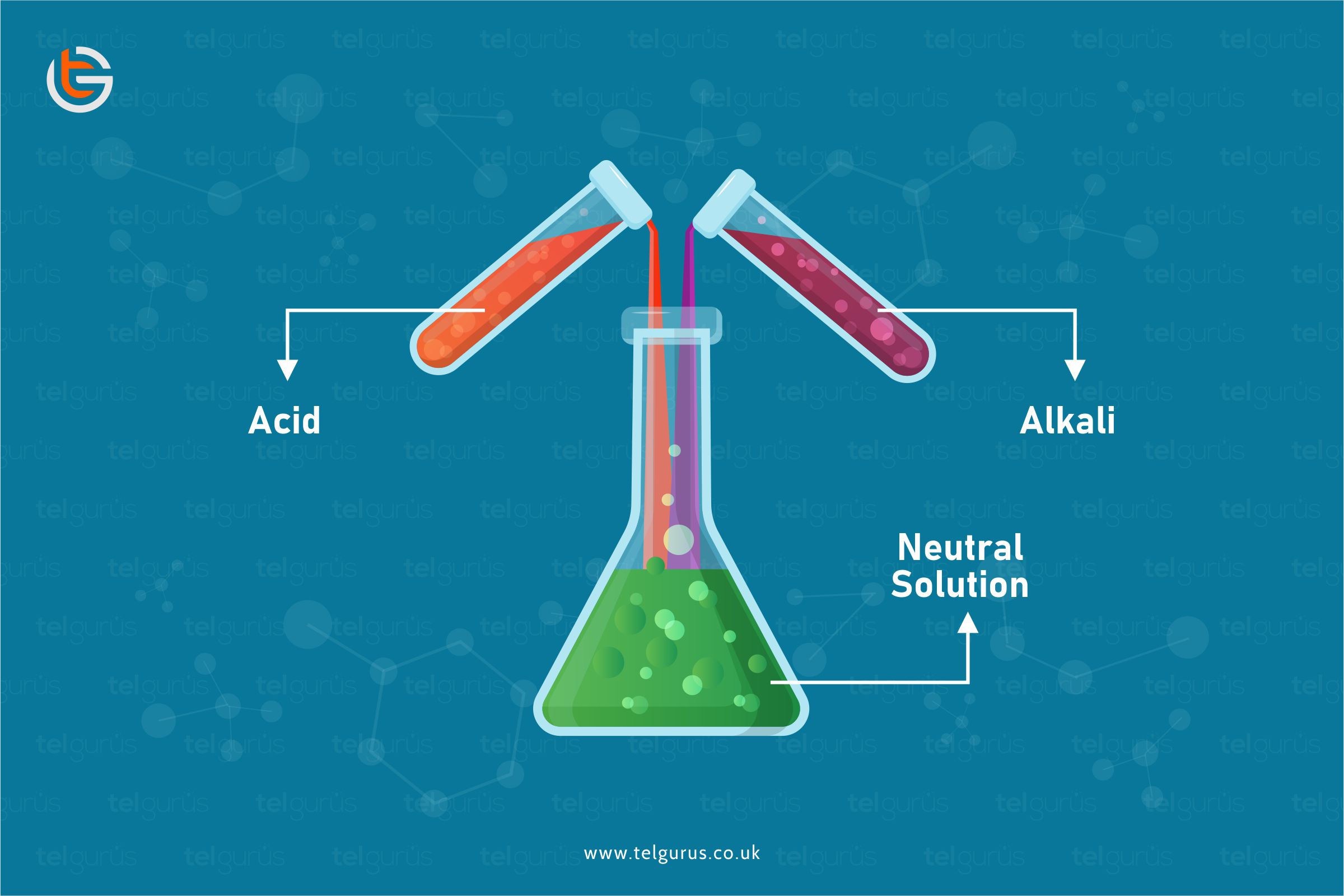 When an acid reacts with an alkali, a chemical reaction happens and the formation of a new substance takes place.

Let us get acquainted with everything you need to know about the query.

Whenever you add acid with Alkali, a chemical reaction takes place, and a new substance is formed.

If you mix the exact amounts of acid with Alkali, you will end up with a neutral solution which is also known as a neutralization reaction.

An acid reaction with Alkali or, say, an acid-alkali neutralization refers to a reaction between the hydroxide and hydrogen ions forming water.

Whenever the acid and Alkali are mixed, a neutralization reaction takes place, forming salt and water.

A neutralization reaction is always

Equation of acid reacting with Alkali

However, here the question is about ions, and there is no salt. So, the acids are H+ ions that give them the desired acidic properties, and alkalis are the OH- ions. And together, they react to form water.

And so the reaction is represented as

When it comes to checking the reaction of an acid with alkalis in terms of ions and molecules, the Hydrogen ions from the acid react with the hydroxide ions from alkalis to form water.

And the reaction is represented as

The three types of bondings are namely

Let us get acquainted with all the essential information concerning all three types of bondings.

What is ionic bonding?

Ionic bonding is the one that takes place between metals and non-metal atoms.

This type of bonding generally involves the electrons transfer from metal to non-metals developing a negatively charged non-metal ion and a positively charged metal ion.

These are more like the blood donations where a metal atom gives its electrons to a non-metal atom.

What is covalent bonding?

Covalent bonds are the ones where two atoms share their electrons. The orbitals that electrons sit in overlie between one atom and the next. This satisfies both the atoms and makes them stable.

Some of the two non-metal atoms that cannot even easily move away from each other are more like the blood brothers.

What is metallic bonding?

Metallic bonding is the one that is different from other types of bonding as it occurs between metal atoms only.

Here the metal atoms are arranged in a regular pattern in which the electrons in the outermost shell are delocalized and form solid metallic bonds.

Here the extra electrons present in the metal atoms are dropped, making the metal a positive ion.

And the extra electrons become an electrons sea that is negative, so the positive metals stick to the negative electrons while forming a large metallic lattice structure.

Understanding the differences between the three types of bonding 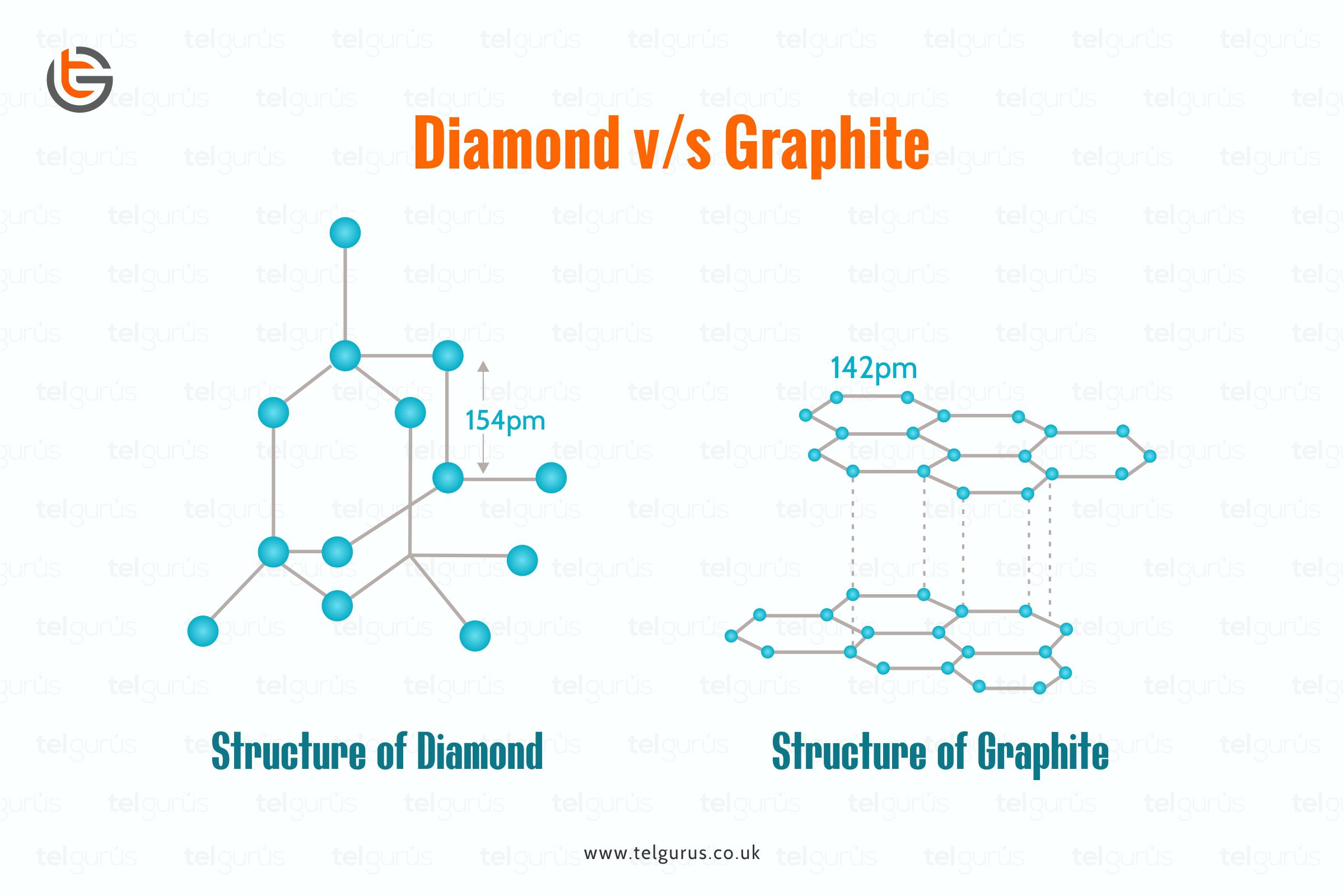 Even though Graphite and diamond are made of carbon, the diamond is hard, whereas the Graphite is soft.

This is due to the strong covalent bond among its atoms forming a regular tetrahedron that is difficult to break.

On the contrary, the Graphite comprises of a flat hexagonal ring forming the carbon atoms layers. The several layers of carbon atoms are so far away from each other that covalent bond formation cannot even exist.

These carbon atom layers are held together by the weak van der Waals forces, allowing them to slide over each other.

And because of this layered structure of carbon atoms, Graphite is stronger than diamond.

Take a rotating graphic of graphite molecules and a diamond structure and try this to understand the reason.

Rotate the graphite molecule. As the Graphite is layered, and there are strong covalent bonds between the carbon atoms present in each layer, only weak forces exist between layers. This permits the carbon layers to slide over each other.

Rotate the structure of the diamond, and do not forget that each diamond atom is at the same distance from each of its neighbouring carbon atoms.

There exists a rigid bonds network within the diamond crystal. And in this rigid network, the atoms cannot even move, which is why diamonds are hard.

Diamond has a 3-dimensional strong covalent bonds network, and it is very complicated to break the extended covalent bonding. And that is why the diamond is considered the hardest substance.

On the contrary, Graphite has layered structures that are held together by weak Vander Was forces. Therefore, Graphite cleaves easily between these layers, which is why they are soft and slippery.